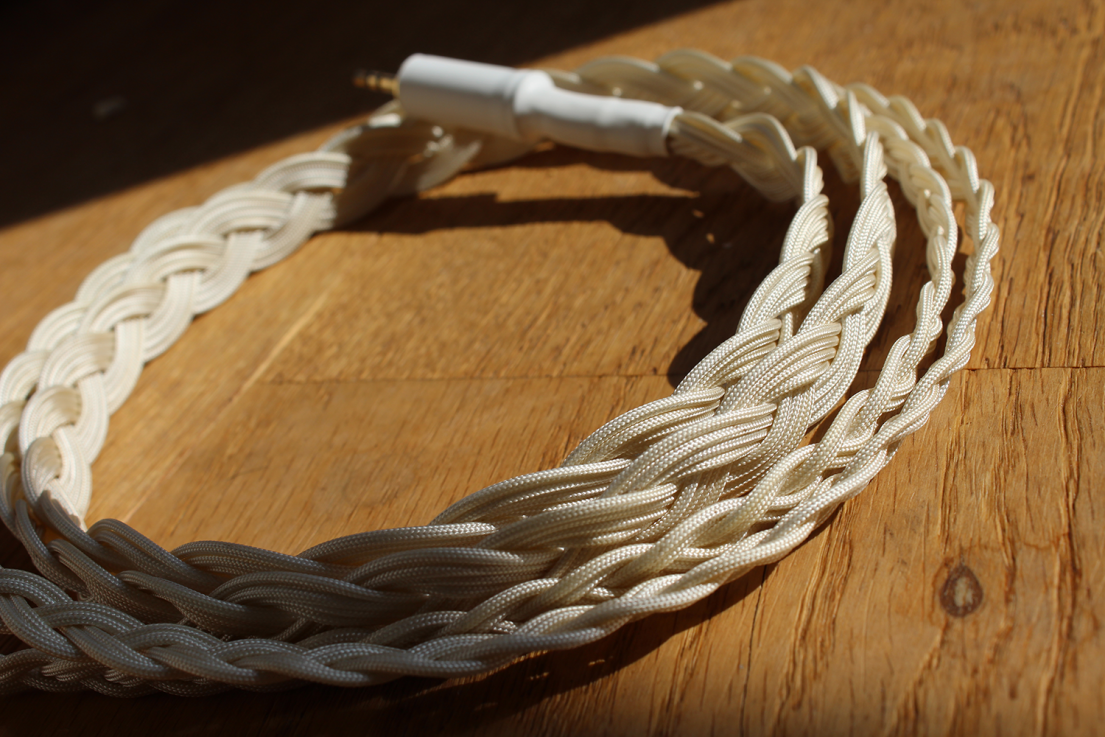 “At the very top of the cable offerings stands the magnificent IEM-R5, from unique cable manufacturer SilverFi.”

BY FLINKENICK ON SEPTEMBER 14, 2017
Shortly after I purchased my IEM-R4 cable a while back, SilverFi announced a new flagship: the IEM-R5. As engulfed as I was with my IEM-R4, most of us are all too familiar with that creeping curiosity towards a new flagship model; that beckoning call, haunting our thoughts – especially if it’s from a company we have a certain affinity with. Luckily, Sezai managed to arrange the IEM-R5 for me to review in a later stadium. The IEM-R5 is last in line, following my prior experience with a few of their products: the entry-level IEM2, and top-tier offerings IEM-R2 and IEM-R4. The crown jewel of what already seems to be a royal product line – for each cable flaunts a Persian flair due to its cotton-sleeved design, while delivering a satin-smooth sound.
The audio world is a peculiar one; you can rarely have your cake, and eat it too – there always seems to be some downside to every upside, and vice versa. The SilverFi cables boast a uniquely natural sound, but are matched with an equally unique build: each individual wire is cotton-sleeved, and requires special connectors. As such, the R5 comes with a few practical concerns. For starters, the cotton-sleeving makes the individual wires thicker. As there are 12 wires woven together in a flat braid, the end result is a somewhat broad, flat cable, which impacts its flexibility and ergonomics. Accordingly, the cable is mostly suitable for indoor use, although one isn’t easily tempted to take such an expensive offering outside in the first place. So purchasing a top-tier SilverFi IEM cable requires some form of dedication from the audio enthusiast – a ritual of proof as it were, that sound comes before all. But for those that decide to power through, there’s something extraordinary waiting down the line.Many words have been written on the uniqueness of the SilverFi sound: despite the increasing cable options out there, none will sound like a SilverFi. And for practical reasons, because SilverFi is the only boutique manufacturer to draw their own wire – creating the cable from the ground up, in contrast to most manufacturers. The properties of the wire, in combination with the cotton-sleeving and special solder treatment, result in a special type of signature – the unique SilverFi naturalness. Important, drawing their own wire doesn’t mean the SilverFi cables can’t match the competition when it comes to performance – the wires maintain a high level of purity. Accordingly, the R5 boasts excellent resolution.

The R4 is a majestic cable, nothing short of spectacular. It reigns supreme when it comes to soundstage width, while combining high resolution with a neutral signature – but the right kind of neutral, where neutral converges with natural: a lightly warm midrange, with smooth treble. And a beautiful timbre. As R4 and R5 both share a cotton-sleeved 12-wire design, they offer a variation of a similar signature, rather than a completely different one – each presenting themselves as strong representatives of the SilverFi house sound. However, they differ in their wire geometry; by means of endless experimentation, Sezai varied the gauge size of the individual wires in order to fine-tune the sound. R4 forms the neutral offering; lightly warm, natural, and fairly linear. While R5 shares a similar smooth signature, it diverges in a different direction – R5 sounds melodious, following a lift in the upper midrange. It’s a different variation of natural, that adds a touch of beauty – a euphoric sound even.The smooth treble works in unison with the midrange, as does the natural-sounding bass. It’s a coherent sound, that doesn’t lend itself for being broken down to pieces. But one of the most crucial aspects of the SilverFi sound, lies in understanding the way it represents the treble. The R5, just like R4, provides an excellent top-end extension – instrumental for its high resolution. However, the upper-treble region itself is softly attenuated. As a result, the general tone of the midrange is warm, while its treble remains smooth. The R5 creates clarity by extending the treble, rather than lifting it, emanating in a ‘soft’ light. It’s a staging that allows detail to come forward in a smooth manner, by means of the stability of the image. Much like R4, the R5 constructs a grand stage in overall dimensions, facilitated by its 12-wire design. It’s not quite as wide as R4, but its depth is impressive, while improving the quality of layering, and ultimately, the general organization of the stage. But more than the absolute improvement in depth, R5 impresses with its ability to recreate a realistic sense of space – an organic environment. As a result, the R5 constructs a clear stage, with a stable black background.
Similarly, by means of its top-end extension, the R5 improves the quality of the bass; its control and definition. For instance, when pairing with iems as the 8.2 and Prelude, the increased control of the bass not only reduces the warm air, but opens up the stage. This not only results in a lighter tone, but an airier stage. The mid-bass itself is clearly defined – a highly resolved bass. Even so, it’s a soft bass in its impact, resulting from the smooth upper treble. A natural-sounding bass, rather than a hard-hitting one. But nevertheless sufficiently impactful, resulting from improved bottom-end extension, as well as excellent balance between the sub- and mid-bass. In addition, R5 delivers a linear upper-bass response. There’s a certain vibrance in the sound that can seem a bit messy at first, as attenuating it results in a neater stage – an effective method to clean the stage, by reducing the noise. But at the same time, there’s a loss of information. R5 instead maintains a linear presentation, resulting in a richness in the sound: a slightly thicker note structure, and full representation of the lower harmonics.The midrange in turn is smooth, and lightly warm in tone. Not necessarily as a result of enhancing the bass, which remains fairly neutral in quantity – but by lightly attenuating the treble. Besides creating a warmer tone throughout the signature, it improves its coherency; the bass, midrange, and treble all share a similar tonality, that binds the music together. Even so, the R5 doesn’t sound predominantly warm, staying fairly close to neutral. There’s a slight thickness to its midrange notes, providing greater body to the instruments. Its vocals are smooth, and inviting. They’re lightly warm in tone, and sound very natural. However, the lower midrange is slightly laid-back, following the lifted upper midrange. As a result, its vocal presentation is positioned slightly further relative to the comparatively neutral R4. But it’s the upper midrange where R5 gets to shine; by enhancing its upper midrange, R5 pulls instruments forward, while adding a touch of light. A dreamy touch to a gently struck electric guitar, or soft note of a saxophone. But always within the SilverFi constraints – smooth, rather than bright.
The IEM-R5 stands proudly at the top of an already special company. As with IEM-R4, there’s a unique naturalness in its signature. It yields a smooth, but resolved sound. And it conveys clarity in its stage, despite the lightly warm tone. But in contrast to IEM-R4, the IEM-R5 doesn’t strife for a completely neutral sound; there’s a beautiful deviation of its upper mids. It’s a variation that logically lends itself for pairing with warmer or darker iems. But personally, I tend to prefer to pair it with already bright iems; a combination that allows the upper mids and lower treble to shine as never before, while remaining incredibly smooth – in a way, the R5 is SilverFi’s form of a guilty pleasure.
SilverFi IEM-R5
Material:          Pure silver wires
Conductors:    12 wires in a flat braid
Shielding:         Individual cotton shielding
MRSP:               $2499