After I started to develop a special liking for audiophile equipment, I shifted my focus continuously from coarse- to fine-graining. At the beginning, I was obsessed with testing and comparing TOTL IEMs until I found a set of complementary in-ears that have not yet let any wish open. Later, I studied pairings with sources, during the time of which I developed a liking for subtle changes in details by playing with equalizers on high-end DAPs. The finest level of hardware tuning was also the one I turned out to be most interested in. Being a physicist myself, cables are the components that are simple enough to be analysed with scientific knowledge (of course, there is a whole lot of science in IEMs and DAPs as well, but the systems are way too complex to be analysed purely based on physical laws).

After long hours at local Hi-Fi stores, I dived deeper and deeper into the exciting world of strings and braidings, and in the meantime I have intensely listened to more than 200 cables available on today’s audio market. However, local audio stores have a strong focus on prominent players (e.g. Plussound, Effect Audio and Whiplash to name a few) such that some exquisite manufactories from the niche in between are not often given the chance to present their products unless in very special and small local workshops. This results in speculation – there are certain names that pop up now and then on internet pages but due to the partially strict pricing of TOTL items many (including myself) hesitate to order their products simply based on luck (regarding personal likings and preferences) or reviews.

One of the prominent niche cable makers is SilverFi: a small cable company based in Antalya, Turkey. While some companies have a certain specialty that distinguishes themselves from their competitors, SilverFi is special on many levels. Let us begin with the company’s philosophy. Any part of their cables is produced in-house: they are one of the very few cable manufactories that produce their own wires. In contrast, it is normal for the bigger players on the market to order their materials from (a globally very limited amount of) high-tech companies. Therefore, cables from different companies sound similar if the materials used are the same – up to factors like tuning and shielding. However, SilverFi is completely out of the ordinary. Their cables are exclusively made of silver but are nothing like any other silver cable on the market. The product range starts at an affordable entry level of about 300 USD and ranges up to 2500 USD for the current flagship. That is a price for which some people buy a whole new IEM, DAP and cable combination. The direct question arising is how a cable can be that expensive, and, even more importantly, does the product justify its pricing. In the following I would like to elaborate on these questions by discussing the SilverFi R2 upgrade cable. It is a pure silver cable with a mid-range price tag reading 1295 USD. 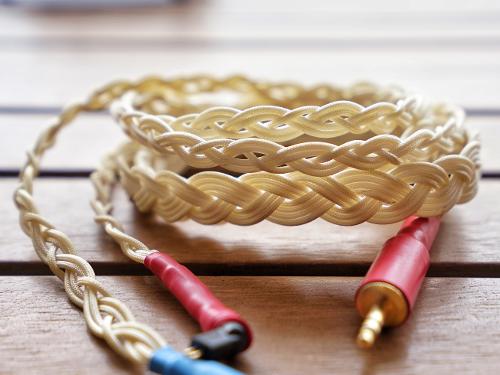 SilverFi cables are veritable eye-catchers. If I had to associate one descriptive noun about the appearance of the R2, it would be “jewellery”. Like a prancing peacock this cable presents itself as a flat 10-braid configuration, which amounts to an almost unusual wide shape. From my point of view, too wide. Another point to mention is the cotton coating of the single strings. It is very easy to get stained such that total home usage is almost predestined.
Let me elaborate on that bold claim a bit more. The braiding is accomplished by bundling two groups of three strings and one group of four strings together and applying the usual three-bundle-braiding, familiar to anyone from child times. The braiding quality itself is flawless. The tightness and distances of single knots is perfectly regular. Combining the tight braiding with the flat braiding style, however, causes the cable to be fairly inflexible. Even perpendicular to the flat braiding direction the cable has a certain grade of stiffness, what makes it hard to use and inconvenient to transport. After the Y-splitting, both sides carry five braids in a 2-2-1 formation. Unfortunately also the end-parts are braided flat and by no means fit behind one’s ear. However, apart from the difficulties of wearing the cable, the cotton sleeving makes wearing nonetheless comfortable.
One further important detail (one of the biggest issues for me as an Empire Ears user) is the 2-pin jack. It is angled by 90 degrees, such that any IEM with a recessed socket (such as the Zeus) cannot be used without an adapter. Since my review is based on a demo unit, this may be of a nuance than a real issue and can probably be changed upon order. Still, not having been able to find a suitable adapter, I had to fall back on my old FitEar 335 SR for this review. On the other end of the cable, the 3.5 mm jack itself is massive and matches the overall high quality of the R2. 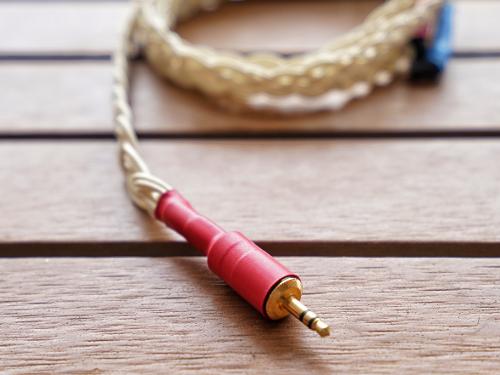 As you could imagine based on the impressions given in the section above, comparing the R2 to other cables is fairly difficult. The result is more or less the same for any TOTL cable: overall, the R2 inspires a lot, while in certain ranges of the sound spectrum other cables may have the lead.

The X8 GPS is my personal every-day cable. Therefore, comparison with this cable may be most accurate in this section. The stage of the R2 is slightly wider than the stage of the X8 (although the X8 already impresses with its insane stage!). More importantly, the stage sounds naturally wide on the R2, while for the X8 the wideness appears to be artificial. On the treble stage, the X8 scores. It is wider and more detailed as it carries the characteristics of OCC silver with gold-capped high frequencies. However, depending on your IEM, this may cause the overall sound to be slightly too bright. In that case I would definitely recommend the R2. In the mid-range, the R2 outperforms the X8. It has the most balanced and widest mid-range I have heard so far, such that even TOTL cables like the X8 GPS cannot compete. As for the bass, both cables are comparable. The gold gives good control and presence of the bass while the R2 just naturally sounds similar. The X8 GPS may be slightly more responsive with the use of fast music and has a less lagging sound.

The X8 GPC gives the inverted result: While the R2 presents a wider and more detailed mid and treble stage, the lower mids and bass of the X8 GPC are cleaner, punchier and better controlled. The X8 GPC is among the fastest and most responsive cables I have heard, so it is naturally difficult for a silver cable to compete in lower stages. However, the resolution is better for the R2. For bright IEMs like the Zeus R, I personally use the GPC since the pairing with the R2 overall strengthens the mid-centricity of the Zeus. For darker IEMs like the FitEar 335 or the 64 audio A18, the R2 shows better synergy.

This comparison is particularly interesting given the special character of the Pluto. For those who have not heard about this cable, it is an OCC silver based 8-braid mixed alloy, that contains gold and palladium. As a result, the treble is smoother than pure silver, the mids have clean silver character and the bass carries a slightly laid back, punchy and exciting copper-like signature.
In comparison, the R2 has a considerably wider stage. This is a phenomenon I observed many times with alloys: when two or more metal are mixed, the cable tends to have more intimate stages compared to cables made of one single material. Furthermore, the R2 is much rounder and natural compared to the analyticity and overall crispness of the Pluto. In terms of clarity, both cables are compatible. However, the R2 has the better resolution and gives, therefore, a deeper sense of 3-dimensionality. For the bass stage, the Pluto has a better bass control which is especially clean and physically pinching. On this stage, the sound resembles partially the lower stages of the X8 GPC, just with less effect and depth.
If you are looking for a very harmonic and organic sound, the R2 may be your choice. On the other hand, if you look for an exciting cable that spices up your listening experience, the Pluto will do the complementary job.

Finally, I would like to briefly highlight once more the outstanding resolution of the R2. This special characteristic leads to a very holographic sound that never fails to amaze. Even most other TOTL cables in the same price category cannot compete with the R2 in this area.
Last but not least, keep in mind that differences are mostly small here since the comparison copes with some of the best cables on the market. All cables mentioned above are marvellous. If a sentence mentioned “cable A is better than cable B in C” it means that B is really good, but A is even slightly better. Furthermore, I picked three cables that I personally cherish a lot. There are a load of other cables on the market that I tried but did not convince me as much as the listed ones.

The R2 is one of the best cables I have heard so far, showing a technical capability that surpasses the biggest portion of today’s market. The price tag of 1295 USD is in the upper range but fully reasonable with regard to the quality and tonality the R2 holds. Nowadays, these dimensions of pricing are rather common, and sadly TOTL cables rather rarely justify their tag. Within the realm of cables, the R2 however, will not let any wishes open. The only concern is that given the anatomy of the R2, people with strong bound to outdoor activities and public transportation may want to consider the purchase twice.
To sum up the pros and cons discussed throughout this review, I would like to start with the negative points (since there are few to none).

Negative: - Build: impractical size and choice of colour/materials for the coating.